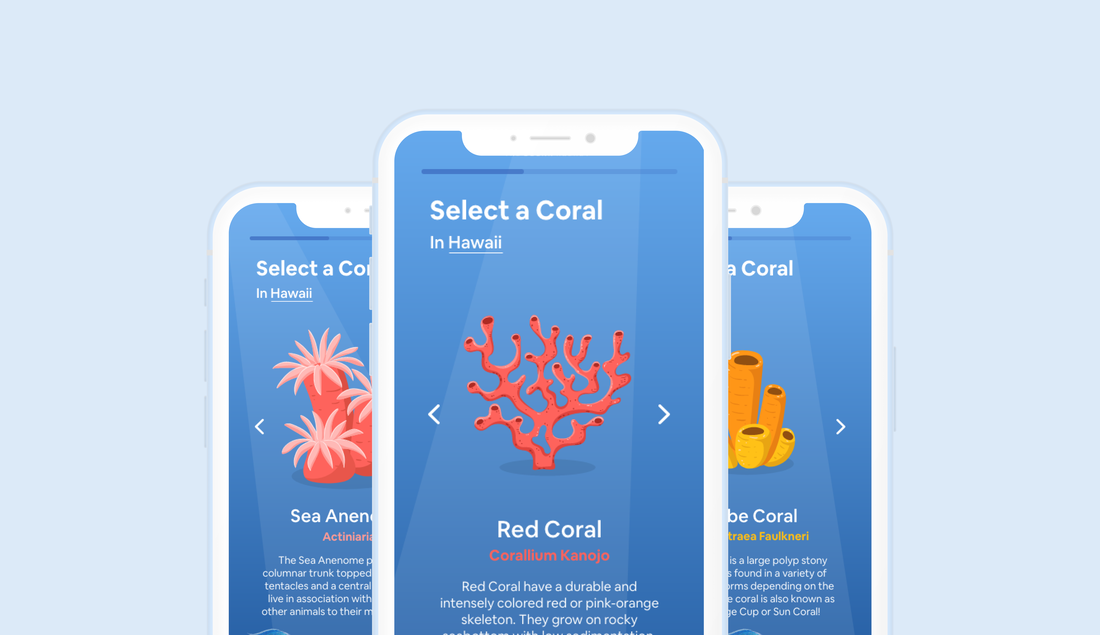 OUTCOME
We made it to the finals of the Adobe Creative Jam competition and got to present this prototype in front of judges, sponsors and fellow competitors! Carol and I collaborated remotely throughout the creative jam to conduct research and create wireframes, user flows, personas, and the visual design. Over the course of the two weeks, we collaborated on Adobe XD to create the design and interactions, while syncing up everyday to review progress.

myCoral is a mobile experience that allows users to adopt their own coral and pledge for ocean protection, all while learning about corals and their role in the marine ecosystem. Altogether, this experience aims to unite people from across the globe to celebrate a community of ocean protection enthusiasts.
SPONSORS
As a part of this competition, these are the organizations that sponsored the event and that we collaborated with to develop this prototype.

Problem Discovery
Surveys show that billions of people worldwide support greater environmental action such as combating climate change and protecting the ocean.
THE OCEAN AGENCY
First, we learned about current climate action problems that affect ocean health from The Ocean Agency. The Ocean Agency is a nonprofit that uses creativity, technology and powerful partnerships to accelerate ocean conservation action. For this challenge, they partnered with Adobe, Pantone, and UN Environment Programme to initiate a global campaign using creativity and technology to accelerate ocean protection and climate action over the coming year.

​The Ocean Agency also created an Emmy award-winning Netflix documentary​ in 2019 called Chasing Coral, which brings awareness to the ongoing global coral reef crisis. We found this documentary to be extremely insightful and inspiring for our project, and we learned a lot about coral bleaching and the impacts of climate change on the world's reefs.
GLOWING GLOWING GONE CAMPAIGN
​In a desperate attempt to survive increasing ocean heat waves due to climate change, some corals glow in vibrant colour. The corals produce brightly coloured chemicals in their flesh that act as a sunscreen. It is one of the most disturbingly spectacular sights in nature. This inspired the Glowing Glowing Gone campaign which is a global campaign that uses colour and creativity to accelerate climate and conservation action.
​
Learn more about the Glowing Glowing Gone Campaign 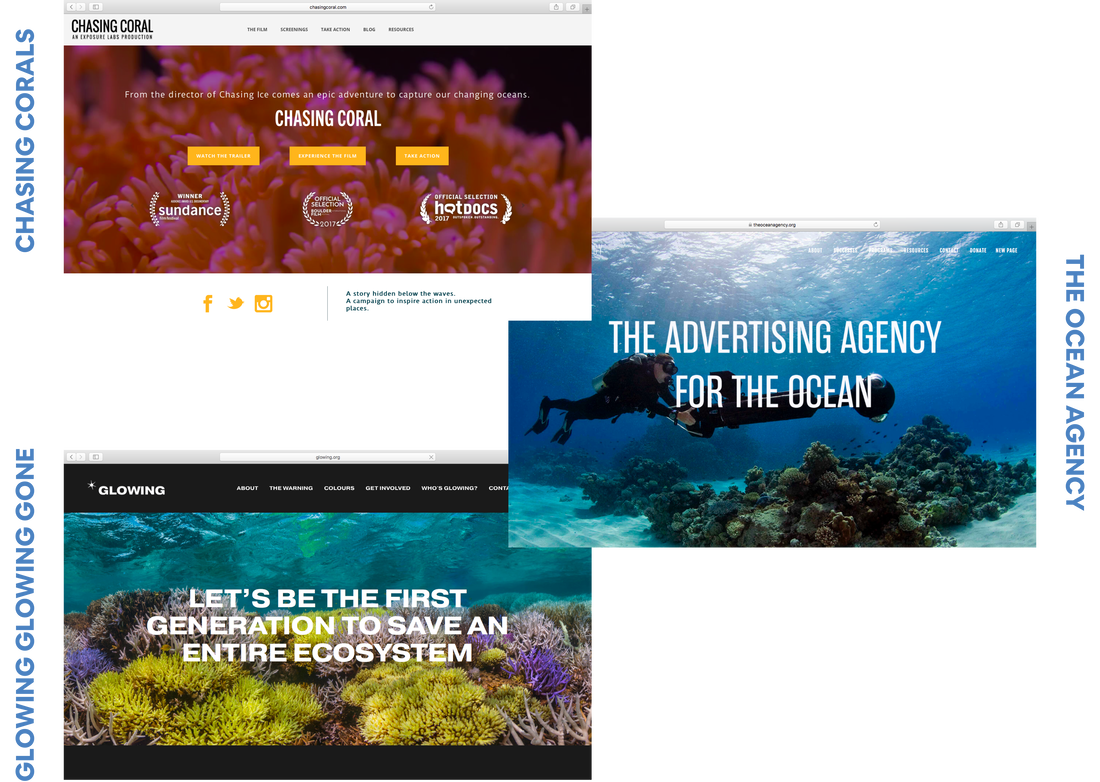 After researching initiatives such as the Paris Climate Agreement, we decided to conduct interviews with our peers on areas including:
PROBLEM STATEMENT
Envision a mobile solution that could enable people around the world to show their support for ocean protection and climate action.
Ideation
We considered what social platforms or websites users will encounter the mobile experience, and if that would be all within one social platform or through multiple channels. As a part of our ideation process, we also had to ask ourselves what or who the motivating factors and influencers are, and what part they play in the campaign or social promotion.
BRAINSTORMING
First, we began by asking ourselves: Where do users typically learn about these issues, what motivates them to invest time into learning more, and how do they usually take action or show their support?​ This allowed us to understand the user journey of how teenagers and young adults receive, process, and take action on societal or environmental issues.

Visual Design
​The short experience we envisioned would require compelling visuals to succinctly get the message across. By using real imagery and abstracting it to the point that it is still recognizable and yet not distracting we created assets that we could later put together and play around with in the prototype. With all the assets finished we had to create our prototype and put everything together, in Adobe XD.

Our visual design reflects the fun and engaging ways that people around the world can get involved with ocean protection and climate action. We imagined the impact if even just a fraction of the 5 billion climate change and ocean protection supporters, could stand up and be recognized.

Introducing the myCoral Mobile Experience
Find the full Adobe XD prototype here.
Reflection
KEY TAKEAWAYS
The openness of the prompt
The prompt we were given for this two week designathon was very open ended and ambiguous: "How do we inspire ocean protection and climate action?" This lead to a very interesting ideation process, where I learnt that it is important to keep your options open while you’re exploring, and to embrace the ambiguity of the prompt.

Designing for a campaign
​This project helped me also learn about the importance of user engagement through social media. This mobile experience is centered around a social media campaign, therefore my team had to consider the factors that go into the success of a campaign, such as social media activity, awareness, and conversion rate optimization.
WHAT WOULD I DO DIFFERENTLY?
I would love to do more in-depth research on social media campaigns and how they succeed, especially with campaigns run by non-profit organizations like The Ocean Agency and The World Wildlife Fund. This would help me make more informed design decisions when designing this mobile experience campaign, and work with more realistic constraints. 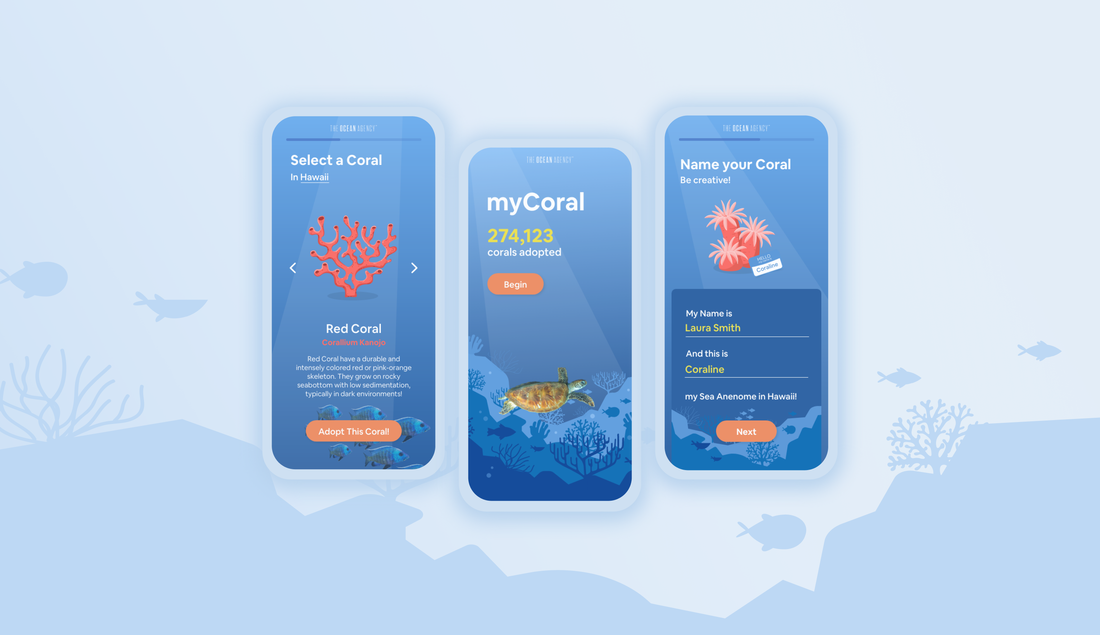